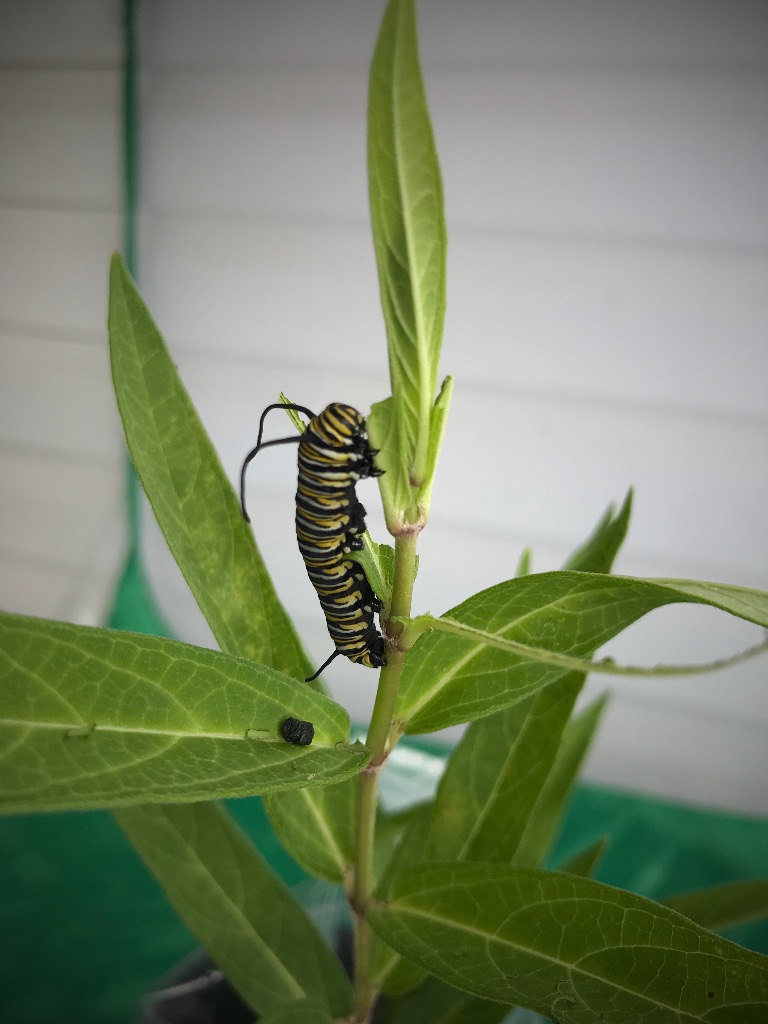 The importance of shopping at native plant nurseries that are proficient in straight species native plants is crucial to the success of your regenerative and conservative efforts in pollinator gardens. I believe that only straight species native plants should be labeled as native; as these are plants that grow in the wild and the only plants that will feed larval caterpillars. Many consumers, with good intentions to save our pollinators are being tricked into buying hybrid and cultivar “nativar” plants—plants that have been modified by man, that have never grown in the wild and DON’T feed larval caterpillars.

I am against labeling these plants as native as many shoppers assume that if a plant is labeled “native” that the said plant will be feeding the pollinator/insects of which they are buying that plant, tree, or shrub.

Finding a local native plant nursery is non-existent in many areas; leaving most people purchasing plants from their local garden centers, nurseries or big box retailers. This limited stock of "native (nativar)" plants, which are mostly comprised of hybrids and cultivars - which do not feed larval caterpillars. Only straight species native plants, trees and shrubs feed larval caterpillars.

A major contributing factor in butterfly and moth decline

This marketing has been an unnoticed and direct cause in butterfly and moth decline. Scientific studies have proven that even bees, choose to  visit a straight species native over both hybrids and cultivar. Birds don't eat the berries from my hybrid hawthorn tree.

The importance of straight species native host plants for butterflies and moths.

Straight species natives are specifically important for re-wilding or planting for butterflies and moths. These plants are the primary plant upon which they lay their eggs as the plant will be a food source for hatching larval caterpillars.

Many people are planting what they think are native host plants specifically for this stage of a butterfly life. Re-wilding with cultivars—and even hybrids stop the life cycle from continuing or even beginning.

What’s the difference between in plants between a hybrid, native, and cultivar?

Native Plant: are straight species plants that have grown in an area for hundreds to thousands of years.

Hybrids:  are produced when one specific variety of a class of plants has the pollen of another genetically different variety of that class crossed with it.

Cultivar: plants bred with selective breeding and they don’t produce true to seed

Know the limitations of non-native nurseries

Listed below are a couple of reasons why they aren't selling straight species natives and some, will even tell you as much.

This fall, my neighbor cut down his native century-old Silver Maple Tree. The loss of that tree effectively disrupted wildlife and removed an entire generation of larval caterpillars that needed that tree for sustenance. Another native host tree had disappeared from my urban neighborhood, leaving a mammoth-sized hole in the biodiversity. This devastation was unacceptable to me. I had a very small time frame in which to plant some straight species native trees and shrubs to offset the food loss for emerging butterflies and moths come this spring. I was hellbent on making it happen

I started with trying to locate another native Silver Maple (Acer saccharinum.) With each call turning me down and reporting that these trees aren't sold because they are a hazard -- my frustration grew. Below, I have listed for you the issues that I ran into, and ways for you to either avoid buying the wrong tree, or prevent hearing misinformation from the start.

How to shop for straight species native at non-native nurseries.

The words "invasive" and "aggressive" are used by many garden centers improperly and interchangeably. These words are NOT synonymous.

For example, I was looking for a host Sassafras tree. I can get one from my mother-in-law as she has them, but I wanted a bigger size so I asked the nurseries about them. “We don’t sell those. They are invasive trees.” Again, another term used incorrectly. Invasive means that the said flora is non-native and takes over. The Sassafras is a native tree which means she should have used the term ‘aggressive’ which means this is a native plant than can prolifically self-seed, sucker, or spread in a 100% perfect environment. I politely told her as much. Lastly, I was appalled that this nursery felt it was ok to bash a native tree that supports life for our wildlife, yet be fine with selling the honeysuckle, pear trees, and many other truly invasive plants listed on our invasive plant list.

While calling around for a native Silver Maple, one nursery felt the need to “educate” me on why they refuse to sell “bad” trees like Silver Maples. “We don’t sell these hazardous, soft wood trees,” I was told. I explained that I was already aware of the soft wood of the Silver Maple causing tree limbs to fall in high winds which happens to this tree in OLD age. That soft wood is exactly why certain birds use those trees for nesting as their beaks aren’t strong enough to create holes in hardwood. I went on to explain that understand some homeowners don’t want to deal with falling tree branches but that I was fine with those perceived issues. I asked them to locate this tree for me as it is what I want and she refused! She continued to angrily try to sell me the popular Autumn Blaze Maple which is a pretty, but useless to the environment cultivar.

Shoppers trust that staff knows more than they do. Most of the time, they don't. Make sure you know MORE than they do, if not, your bound to spend big money on a tree that won’t perform the way you want it to in your landscape.

After calling a gazillion nurseries who didn’t the carry the Silver Maple, and refused to locate one for me; I decided to go with a Northern Red Oak (Quercus Rubra.) Some nurseries list their stock and their pricing online and include the botanical name. Most garden centers list the common name only. Of the nurseries called, most were selling trees directly to arborists and garden centers not the public. This left me calling garden centers and I stuck with using the botanical name. Brevity and directness is key when asking questions.

I asked this question:

“Do you carry the native Quercus Rubra tree?"

I received this response “yes, we carry Red Oaks.”

I didn’t ask if they carry Red Oaks. I asked if they carry a Northern Red Oak, but used the botanical name to be specific on which Red Oak I wanted. He didn’t answer the question that I had asked.

I re-asked the question a bit differently in hopes to get an answer “the red oak in stock is a Quercus Rubra?”

and still received an incorrect response

“yes, we have a Scarlet Oak which has red leaves.”

I didn’t want to hold this employee accountable for not understanding that he hadn’t answered the question my question twice now. After all, we've all been in our late teens starting a new job...i get it. It's not his fault. A Scarlet Red Oak is a Quercus Coccinea and not a Quercus Rubra. To get my question answered properly and let this poor uninformed guy off the hook; I nicely asked for a manager. Turned out—they didn’t carry the Quercus Rubra. This is why it’s critically important to use botanical names when speaking to nurseries and garden centers. Many of these places are filled with people employed who do their jobs, but that doesn't mean that they necessarily know every detail about plants.

4. Settle only for hybrid species when you have enough straigh species natives to feed larval    caterpillars

After 3 weeks of misinformation hell and desperate to get these items planted before winter; I finally found a person WAY outside of my area, who would get me my straight species native trees and shrubs.  They were much smaller than I hoped to purchase, but I purchased them anyway as natives that are small are better than cultivars that are big.

Of the 5 trees that I bought, 4 are 100% straight species native. 1 is a hybrid-cultivar. The hybrid-cultivar is Serviceberry tree called Autumn Brilliance which is a hybrid of two native Serviceberry tree species and a cultivar to bring about the coloring of the fall leaves . Their reference to this tree being native and a food source for larval caterpillars proved contentious for me. Painfully aware that this Serviceberry hybrid won’t be a food source for larval caterpillars as they claim it will ( I let them know this description is untrue) (update, they removed feeding larval caterpillars from the description after i gently let them know that this information isn't true); I bought it anyway because I needed a larger tree for nesting birds come spring and I have 5 other trees that support larval caterpillars.

I can spot a cultivar, hybrid, quickly- can you? See the pictures below to understand what you read.

To end extremely clear, hybridization can and does happen naturally in the wild—and to be extra clear some of those naturally occurring hybrids don’t feed larval caterpillars either. Cultivars are always done by man.  What I am focusing on is the way plant terminology is being misused and it is both confusing and deceiving to consumers when choosing plants to feed larval caterpillars. I am against using the word "native" on plants that aren’t single straight species natives.

Please shop only from native plant nurseries if you can, especially for larval caterpillar host plants. If you can’t, please use botanical names only when shopping and see my “don’t buy” pictures below. These are screenshots from a local nursery. These photos are intended to help consumers better understand labeling so they you don't buy plants that won't feed larval caterpillars, if that's your intended goal. These pictures are not an assault on non-native nurseries, for all I know the people who print these ads are similar to those folks who are paid writers for most websites and they just don't know that the wording is incorrect and confusing.

Our pollinators depend upon our consciously informed shopping choices.  It's clear that I need to now grow some straight species native trees, as so far, it's been only plants. I will start this year. Better late than never. 🙂 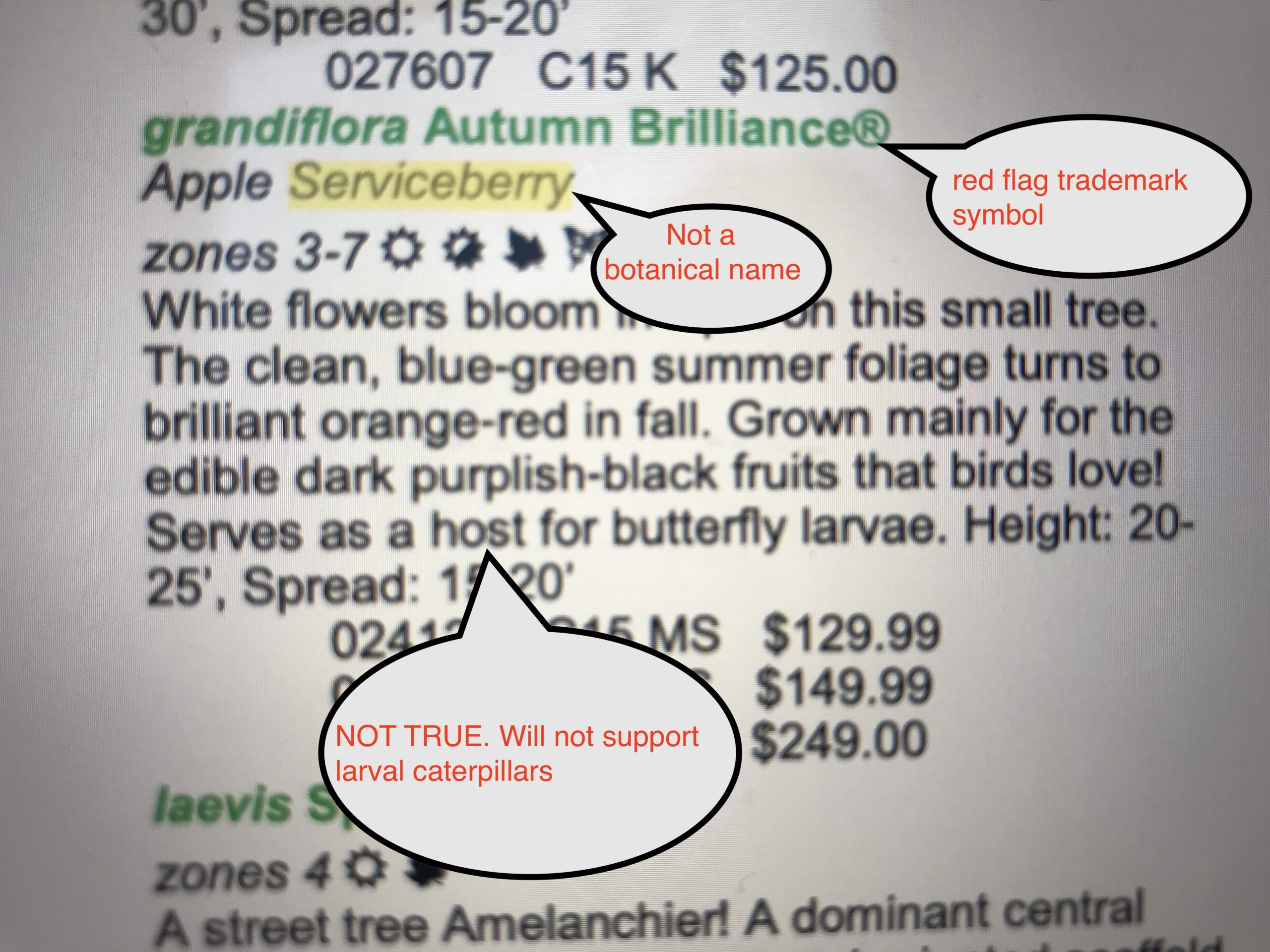 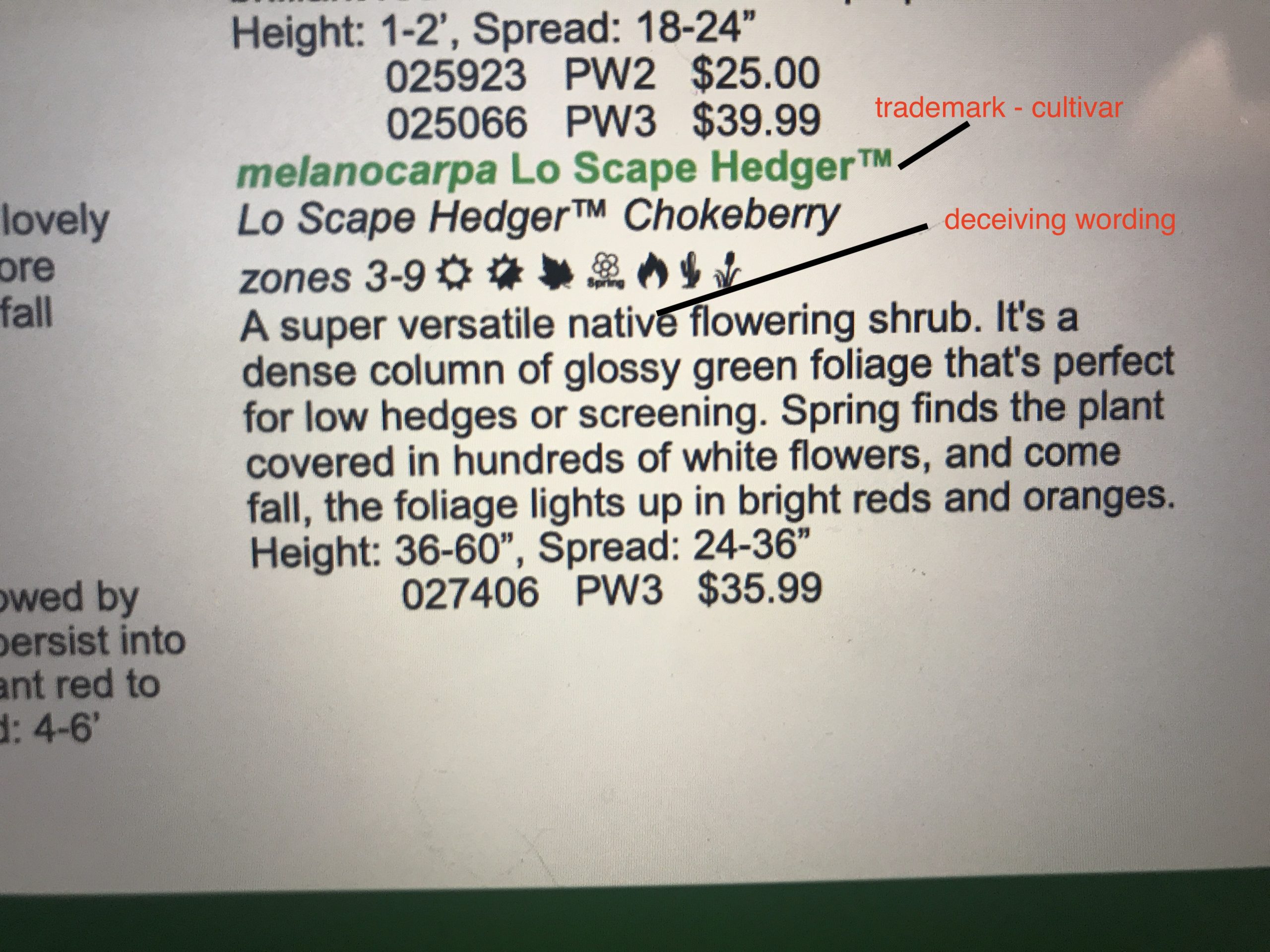