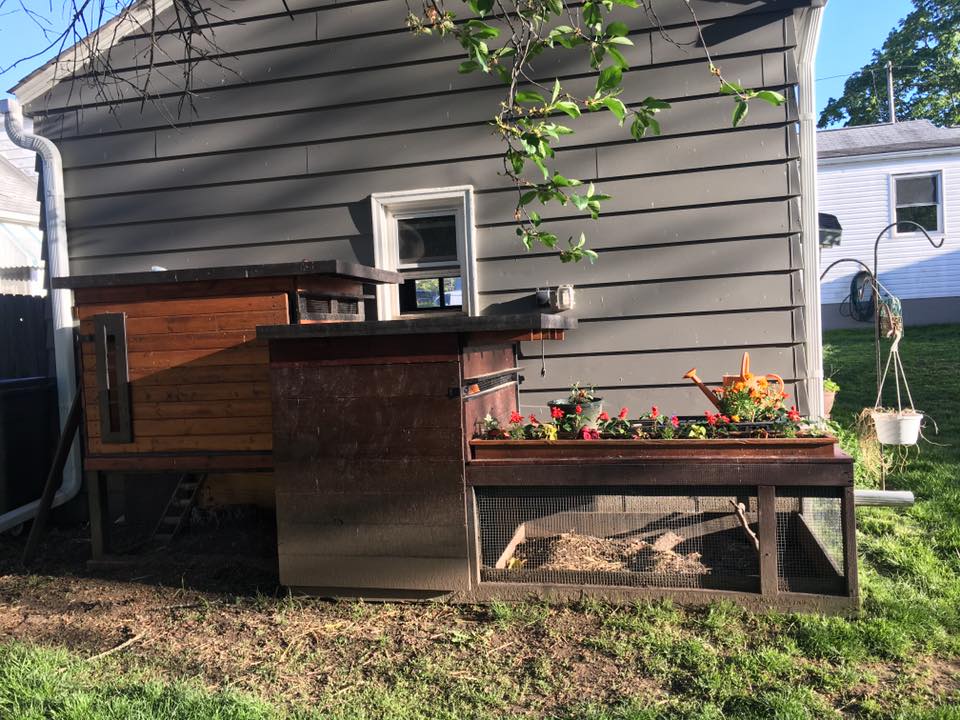 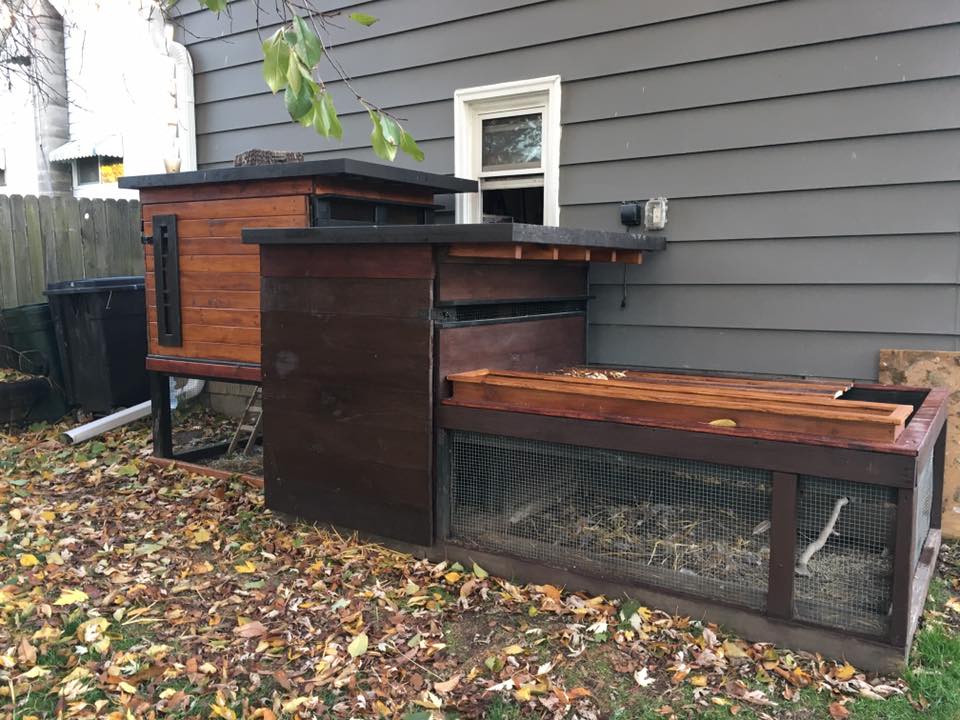 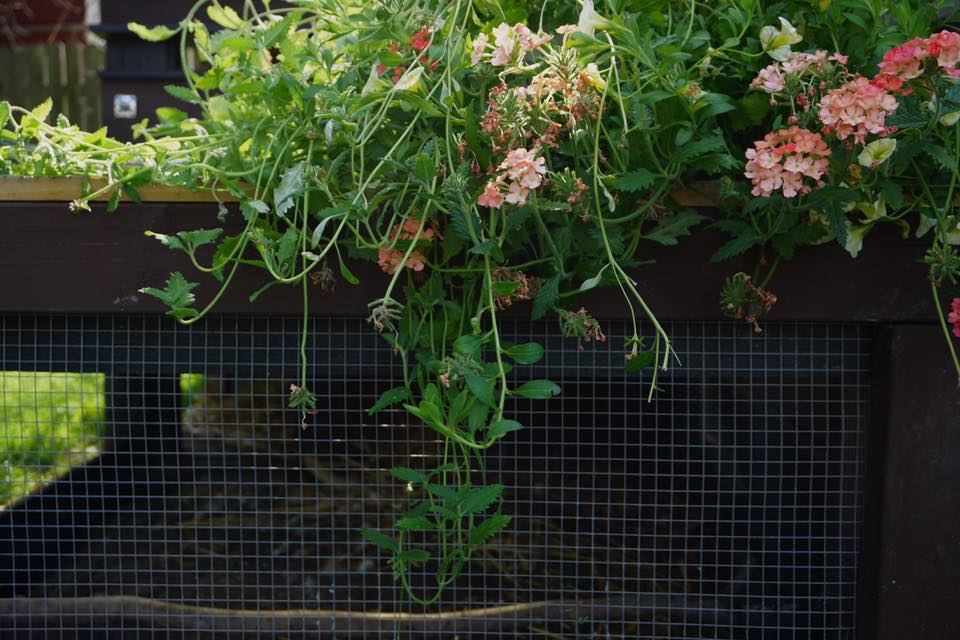 In 2016, I wanted to add onto to an existing chicken coop and create a mid century modern style chicken coop. Over the years, I have designed my own coops with the belief that I had created something that solved my issues like form or functions that I missed, forgot — or just plain did wrong on the earlier coop designs. Per usual, this coop was my third design-- and although I love it-- I still have some issues with form and function! Maybe someday I will create a 100% perfect coop before I die, but for now, this beauty will have to do-even with it's imperfections!

I set out by having the man sketch out what I wanted. It was during that process, where I compromised on some form and function as we squabbled over nest box placement. I had chickens before we met, and I should have stuck to my guns over where I wanted the nesting boxes but I let him talk me out of it! This compromise created the forever lasting form flaw in this current design, ruining my attempt at perfection. Still, I love my chicken coop! My chickens love it, too!

This coop is three stories, with shortest story being the run. I used galvanized welded wire mesh instead of chicken wire, as I had a dog easily tear through the chicken wire on the previous coop. The top of the run is also wire mesh flanked by boards leaving the run roof as open as possible, but safe from predators.

Two flower planter boxes were built-in above the run, allowing plants to softly dangling and trail edible flowers for the chickens to eat. They like verbena— alot! Other plants planted are lavender and mint which repel ticks and mites. The run floor is dirt, with sand and other dirt added, that allow for dust baths and hole digging in the run.

The mesh wire over the run has a tinted polycarbonate sheet that is place over the top when it’s raining; leaving them the ability to see the sky overhead and remain dry.  We cut plywood to fasten to the side of the run at winter time, effectively keeping the cold air out. I’m thinking about cutting polycarbonate panels for the sides, like the top, so it will get more light inside the run during winter time.

The second story has a perch and an inside access door to the third apartment. The inside access door with window in it that was installed to be able to quarantine a sick chicken or separate broody hens from nesting boxes. It has always been the latter that the door needs to be shut once in a while. Other than that, the hens lounge in whichever apartment they choose. I wanted them to be able to look outside, no matter where they are inside the coop; this story has a window cut out all the way across, again, fitted with mesh, open for ventilation and overlooks the run. A perch runs diagonal inside and the girls sit there and peer out the window. The window is fitted with hinged boards that act as shutters that can close in the winter. A slanted roof on this section allows the water to run down into the flower box— and down the ridge corrugated roof on the run— and out into the yard.

A preferred sleeping area and the primary egg laying spot; the third story is also the tallest. There is a small run-like area under the floor of this section where the nest boxes are located. A hinged floor that opens like a door makes for easier access to the nesting boxes below. The floor is also completely removable so that is can easily be cleaned. The mistake here—the floor is DAMN heavy. I should have used cedar! A second mistake— I didn’t use the vinyl floor covering over the wood, so while it is easy to clean, vinyl would have been an even easier clean. I rarely have to take the floor out anyway, because I used the dog pooper scooper to keep up on the inside. The door on this section has a window that feels a little Japanese. I love it. They can look out the door or the window on this side, which again, is open with mesh and has hinged shutters that can close for winter. The perch in this section is their favorite for some reason and they choose to sleep in the third story at night.

My chickens free range the yard from 7am until dark- not under roofs or cages— completely able to do whatever they want. I keep only two chickens as that is all I need to keep me supplied with fresh eggs. I don’t eat my own chickens. I once had a chicken that lived for 11 years. She is buried in the back yard. Even at the old age of 11, she would lay an egg maybe twice a year— which was ok for me. I don’t use lamps during the winter to force my hens to continually lay eggs-- which I find cruel. I liken that to being on my period year round—or being pregnant year round -I would never subject my hens to that kind of treatment. If they were meant to lay eggs continually, their bodies would do that naturally. With that said, when winter comes it gives them a nice break from summer egg laying. My hens— Laverne, she is a Lavender Orpington, and Anne Shirley is a Buff Orpington. They come when called and like to hang with me in yard, are excellent bug control in the veg garden and they love this coop as much as i do.